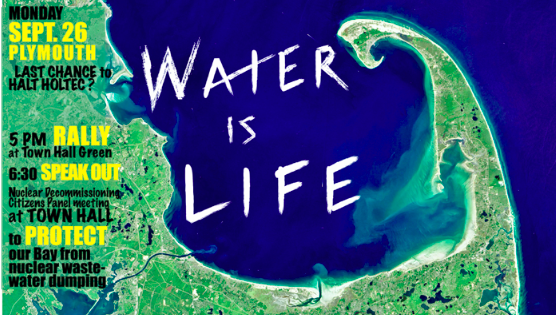 Attend this rally to protest the dumping of more than 1 million gallons of radioactive water into Cape Cod Bay. Here is the background story:

Pilgrim Nuclear Power Station stopped generating electricity on June 1, 2019, and is now being decommissioned. Pilgrim is now owned by Holtec, a large company based in As part of decommissioning, Holtec, Pilgrim’s current owner, needs to dispose of more than 1 million gallons of left-over radioactively contaminated water.

Holtec has two options: discharge the contaminated water into Cape Cod Bay, or transport the water to an existing off-site radioactive waste facility.

Holtec wants to dump the water into Cape Cod Bay, for one simple reason, it’s cheaper. The contaminated water will inevitably flow into Plymouth, Duxbury, and Kingston Bays. The bays are semi-enclosed, and circulation currents tend to keep the water in them. It is not quickly flushed out and dispersed in the ocean, but more likely to end up in the sediments at the bottoms of the bays or beaches. ​ Vermont Yankee, a nuclear power plant very much like Pilgrim, will send 2 million gallons of its low-level radioactive wastewater (twice the amount Holtec is contemplating dumping) to an Idaho waste facility rather than discharging it into the Connecticut River. There is no good reason for Holtec not to do the same.

Obviously, the impact of one million gallons of radioactive water on our ocean ecosystems and area beaches will be devastating. Come to Plymouth to call out this travesty.