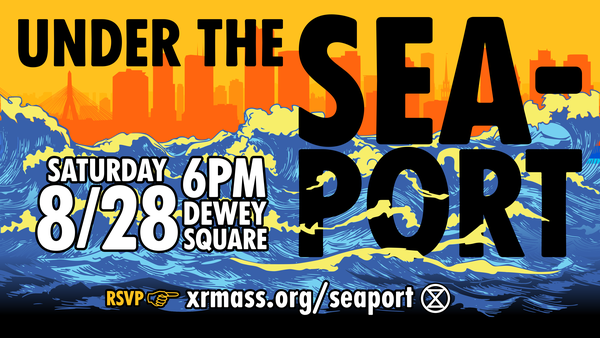 News Alert: it's getting hotter. Boston will be under water!

Join us for a very visual and vibrant spectacle in the Boston Seaport. We will disrupt business as usual in the neighborhood with plenty of art, song, chant, costumes, a band, and an XR display ;-) We will be filmed as part of a new documentary by an environmental journalist from the Boston Globe.

This action will highlight the absurd climate denial and injustice of developing a $20B dollar neighborhood on one of the most vulnerable geographic areas of Boston to the effects of climate change. Over 63 projects have been approved for development in the Seaport, a financial hub that was built just above sea level from an old port area. It's one of the largest international development projects after the known effects of climate change. The entire neighborhood is projected to be below sea level by mid-century. A single nor'easter is going to cause $1.3B of damage by 2030. Meanwhile, ground is still being broken and billions of dollars are still being spent every day to create high rise luxury condos for households that make twice the average household income of Boston. It's climate denial and an environmental justice nightmare and we will call it out as such! We need billions of dollars spent on the transition away from fossil fuels and towards climate resiliency projects, not for the wealthy's last hurrah before the flood.

How can I participate?

We have a LOT of roles to fill with fun art and banners. Check the list here and write your name down for a role (in order of preference) HERE: Seaport Roles List

Otherwise, help us make a mockery of the seaport and dress in half business attire and half beach attire (you choose which half!) and we'll parody the flooded commutes to be. Otherwise, just wear blue :)

Masks are recommended due to the recent increase in COVID cases.

The Seaport was coined the "Innovation District", but we're going to call it out for what it really is: the "Inundation District"


This action should be very accessible. We will mostly stick to sidewalks and streets that are well-marshalled.