In collaboration with GreenRoots, we continue our #NoEastieSubstation campaign and are calling on Governor Healey and first-in-the-nation Climate Chief Hoffer to intervene on the local community's behalf.

"This is a classic example of environmental injustice. The East Boston neighborhoods have been overburdened with industrial infrastructure serving the entire region of New England. We do need more greenspace, not an dangerous electrical substation in a climate-induced flood zone. Water and electricity doesn't mix well.” said Jule Manitz, a Chelsea resident and organizer for Extinction Rebellion Boston.

A substation is a piece of infrastructure that allows high voltage electricity to be dropped to a lower distribution level voltage that can be used in households. Residents in the Eagle Hill area of East Boston are concerned about this particular substation, because it will be located adjacent to Chelsea Creek, in an area that floods during storms. Electricity and water do not blend well, so community members are concerned about the possibility of an explosive accident. The proposed site is also adjacent to a playground and only a few hundred feet from a large storage area for Massport’s jet fuel. A fire could be disastrous.

This site had been promised to the community as a space for outdoor recreation. The working-class, immigrant-heavy community has already been overburdened with industrial pollution the nearby airport and highway, and regional stockpiles of jet fuel, residential heating oil, and road salt. Taking away another public green space without informed consent from the community is an egregious act of environmental racism. Many residents of East Boston have felt excluded from full participation in public hearings about the substation, for reasons that include inadequate outreach to residents and language accessibility Massachusetts has made some recent progress on codifying environmental justice into law, but the substation was approved prior to the new climate bill’s approval.

The local community and GreenRoots an environmental justice group in East Boston and Chelsea, have been resisting Eversource's substation project since 2014. Residents and environmental justice allies have been showing up to public hearings, rallying, and engaging in direct action to stop this project. Extinction Rebellion Boston stands in solidarity with GreenRoots and the local community in opposition to this substation.

Opponents demanded that the need for the substation be re-examined, as local energy demand has undoubtedly changed during those years, but the EFSB refused. If Eversource’s claims of increased energy demand are well-founded, a cleaner, more affordable, and more democratic solution would be to install rooftop solar panels, and pair them with battery storage. The Union of Concerned Scientists undertook a study that determined this option is a feasible alternative. Such a solution could be part of a just transition away from fossil fuel energy, centering and providing benefits to a community made vulnerable by years of environmental injustice, in line with XR’s fourth demand.

In November 2021, nearly 84 percent of Boston voters cast their ballots in opposition to an electric substation that Eversource plans to build along the Chelsea Creek in the Eagle Hill neighborhood of East Boston.

Unfortunately this ballot question is non-binding. Shortly afterward Eversource has filed a special request that supersedes 14 local and state environmental review processes with the Executive Office of Energy and Environmental Affairs. That certificate was granted in November 2022 so that Eversource could start construction of the East Boston substation. Meanwhile, GreenRoots and the Conservation Law Foundation are still appealing the EFSB's decision to the Supreme Judicial Court in late December.

The substation is not fossil fuel infrastructure, but it would allow Eversource, which, like other utilities in Massachusetts, uses mostly gas energy, to expand its monopoly over electricity in the region. After the approval in November 2022, the cost for the substation was hiked from $50 million to $103 million, the burden of which would be passed onto Eversource’s ratepayers, regardless of their opposition to or benefit from the project. The addition of infrastructure allows utility companies to continue making profits on their investments, even as they continue to lobby against expansion of solar energy.

In May of 2022, members of XR Boston occupied the lawn of Eversource CEO Joseph Nolan, bringing a substation art installation to his backyard in Belmont. In addition, the climate activists demanded that Eversource stop obstructing climate action and commit to a rapid and just transition away from fossil fuels to green, renewable energy.

Support the Ballot question in the Boston election November 2, 2021.

It is a non-binding ballot question which calls for meaningful participation from Boston residents in the approval of public utilities. Vote NO on question 2: "Should a high voltage, electric substation be built at 400 Condor Street in East Boston, along the Chelsea Creek, near homes, parks, playgrounds, jet fuel storage, and in a flood risk area rather than in a nearby alternative safe and secure location such as non-residential Massport land at Logan Airport?" Find more information here.

A group of climate justice activists blocked Governor Charlie Baker’s driveway with a 27-foot bright pink sailboat reading “Climate Emergency.” The activists are putting Governor Baker under a “citizen’s arrest” for his repeated crimes against environmental justice communities (including the approval of the Eastie substation) and his climate inaction.

Bathtub/Toaster action: Water and Electricity does not mix

On Aug 2nd 2021, Extinction Rebellion activists protested the Eastie substation and blocked the entrance to Energy and Environmental Affairs office in Boston downtown to get the EEA Secretary Kathleen Theoharides to deny Eversource their needed Chapter 91 permit. Chapter 91 is supposed to protect the public's interest in waterways and makes sure waterfront buildings are not dangerous. Local activists in East Boston filed appeals to the Chapter 91 permit. XR Activists performed street theater with an oversized fake toaster and a pink bathtub that read, “No Eastie Substation.” An activist, dressed as an Eversource executive, threw the toaster into the tub to demonstrate what Eversource is doing to our local East Boston community, highlighting the key message, “Electricity and water don’t mix.”

On July 30, 2021, a coalition of XR Boston, GreenRoots, Sunrise Movement, Mothers out front, and May 1st coalition holy a rally in East Boston and marched to the site of the proposed substation. With colorful banner, signs and flags, we demanded from Eversource to stop destroying our future for shareholder profit.

No Eastie Substation Protest on January 31, 2021 at the Condor Street Urban Wild in Eagle Hill. With tea and samosas, about 30 rebels and local residents withstand the January cold and protested the proposed East Boston electrical substation on the proposed site is the fenced, snow covered area in the background.

We participated in solidary during energy facility siting board (EFSB) hearings. Hundreds of people logged on, more than 50 testified, speaking out against the substation. Various rebels contributed statements and comments. The local community provided expert options from across the field. Not a single person spoke in favor of the project. The EFSB whipped off any evidence, that has been brought forward during the hearing.

"Pull the Plug on Eversource" Action on February 21st, 2021 in Boston.

Just before the final decision of the EFSB, we marched from the State house to the Boston City Hall Plaza with a stop at the Energy and Environmental Affairs Office. We demand from the responsible leaders to stop the eastie substation. In a theatrical performance rebels brought small appliances to symbolically to "Pull the plug on Eversource!".

The plan to build something potentially explosive next door to the storage depots for 100% of Logan airport’s jet fuel, across the street from a soccer field and a children's playground, sounds so absurd that we could not help us but create a comic skit of the situation. We hope that it provides a little comic relief and raises some awareness. 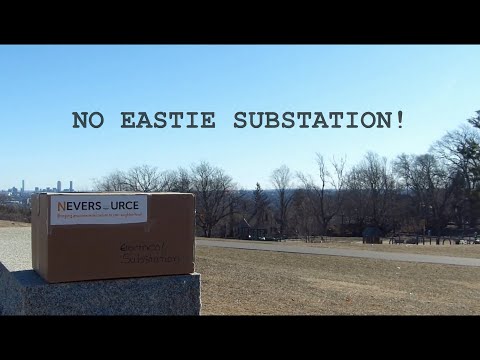