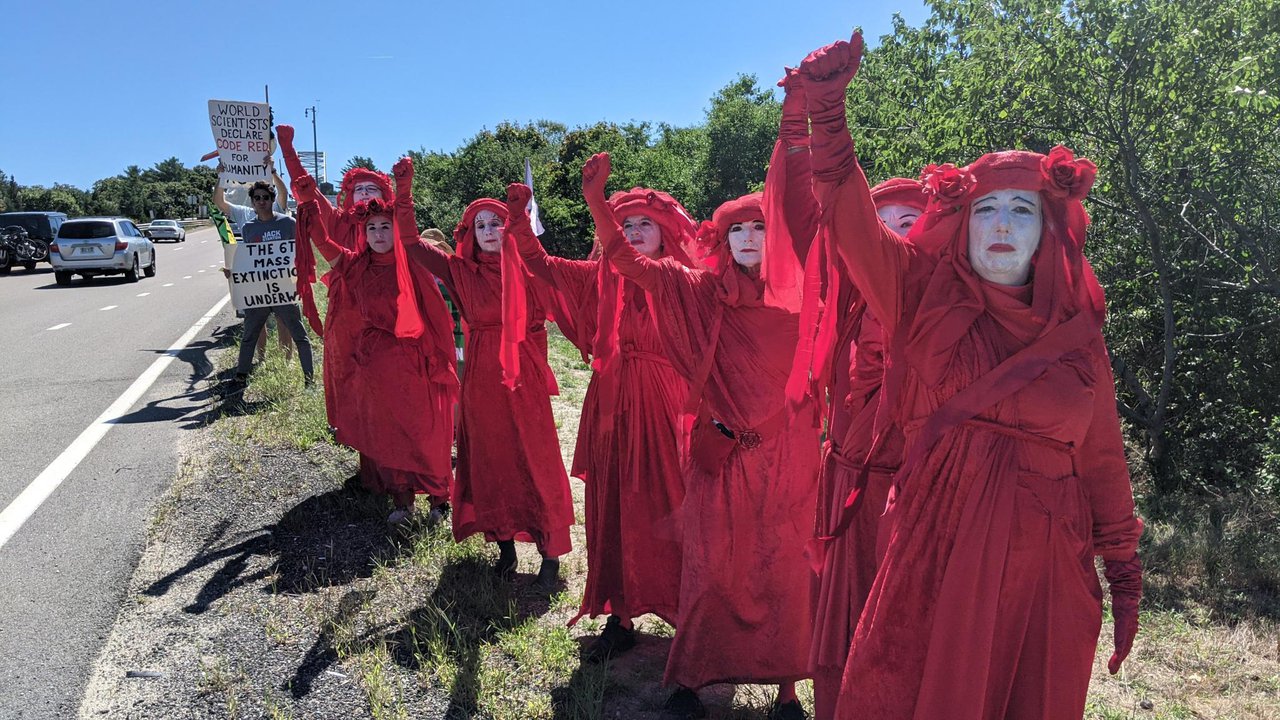 CAPE COD, MA — Local members of the international grassroots environmental movement, Extinction Rebellion, and their related ‘troupe’, the Red Rebel Brigade, stood out on the Bourne Bridge today as people swarmed to the Cape to enjoy Labor Day weekend. This is the third year Extinction Rebellion has chosen to heighten the awareness of Cape visitors about the Climate Emergency and how Earth is begging for urgent, drastic action.

“The recent Inflation Reduction Act (IRA), though a significant step in the right direction, is still inadequate for Earth’s and the Cape’s long-term preservation,” said James Comiskey of Extinction Rebellion.

Climate activists held signs, banners, and provided informational leaflets highlighting the beauty of the Cape and how the burning of fossil fuels and ecological destruction around the globe puts the Cape at risk. Accompanied by members of several Cape environmental groups, activists dotted the Bourne Bridge in a colorful spectacle.

There was also an appearance from the Red Rebel Brigade, a silent performance troupe that wears bright red robes and white face paint. Their red robes represent the blood that has been and will continue to be shed because of the climate crisis as governments around the world fail to take the urgent and substantial action needed.

This summer, despite Earth being in a La Niña cycle (1), we’ve had record flooding, heatwaves, wildfires, droughts, and crop failures in the U.S. and across the globe that will get more extreme every year if governments don’t act with more urgency (2-4). And Earth’s tipping points, which will cause “runaway heating” and an “uninhabitable hothouse Earth,” are being reached faster than climate scientists projected (5-7). Global action must be rapid.

Cape Cod is at particular risk from the climate and ecological crisis. Glacial ice melt will flood coastal communities as sea levels rise (a projected 3 ft as early as 2030), toxic algae blooms will become increasingly common as temperatures increase, and sharks will continue to come closer to the shore as oceans warm and disrupt the normal patterns of marine life (8). The Cape is also in the position to utilize tidal and wind power in a way that other areas in the Northeast can’t.

“We are here again this year to continue raising awareness about the climate and ecological crises and highlight how our beloved Cape Cod is at particular risk,” said James Comiskey of Extinction Rebellion. “Global emissions continue to rise, in spite of countries’ commitments stated at COP26 and commitments of the new Inflation Reduction Act. Time is slipping away, and we need more drastic action in order to avert the most catastrophic consequences of the climate crisis.”

The new Inflation Reduction Act is only a start in addressing the climate crisis:

“For the far heavier lift — essentially eliminating the nation’s fossil fuel emissions in the next two decades — Congress would need to enact even more ambitious legislation than the historic bill just passed by a razor-thin majority, experts said. To zero out emissions by 2050, Congress would have to take on the politically difficult burden of taxing, penalizing, banning or phasing out the coal, oil and gas pollution that is driving global warming,” NY Times 2022, Friedman & Davenport (6).

The recent IPCC report from the UN (9) states that we need to rapidly scale up renewables as we phase out existing fossil fuel infrastructure. But the IRA legally protects the fossil fuel industry by allowing them to drill and expand production for the next decade. It opens up millions of acres in the Gulf of Mexico to new drilling, putting frontline communities at risk (10). This is not compatible with maintaining a habitable Earth (11,12).

A new study reports that the possibility of human extinction has been ‘dangerously under-explored’ and that even low levels of warming could lead to ‘apocalyptic disaster' (13). Extinction Rebellion and other climate organizations are calling on President Biden to do more to protect Earth and life on Earth by declaring a Climate Emergency. Declaring an emergency would unlock executive powers to protect ecosystems, stop fossil fuel expansion, and speed the development of renewable energy (14).