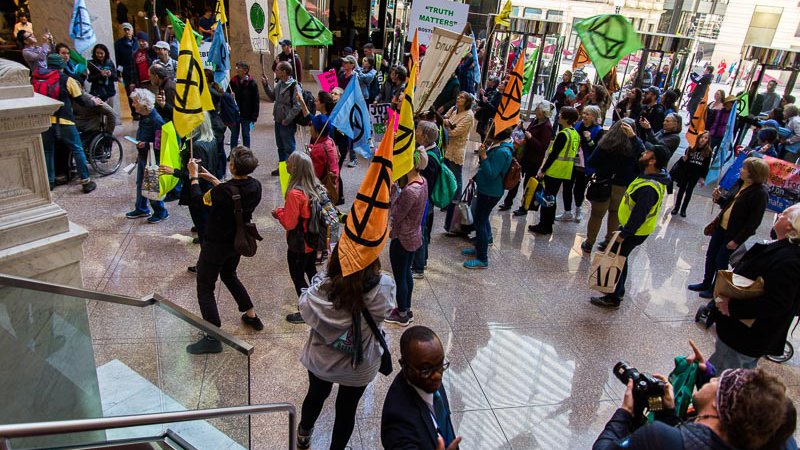 Extinction Rebellion Massachusetts breaks the silence on the Climate Emergency

Boston, April 17, 2019─Beginning outside the Old State House in Boston, members of Extinction Rebellion (XR) Massachusetts are holding a non-violent protest planned to include acts of civil disobedience. XR will invite the Boston Globe to fulfill its pledge to report the truth, and take leadership in its coverage of the climate crisis. The action is part of the launch of XR’s International Rebellion, in which XR groups across 33 countries are demanding that public leaders tell the truth about catastrophic climate disruption.

We are in the midst of a full-blown climate emergency, with the future of all life on earth at stake, but governments all over the world have failed to take decisive action on climate change. Yet, headlines from respected media outlets like the Boston Globe have not reflected the climate crisis with sufficient urgency or communicated its full impacts on human life. "It breaks my heart that my two children will be growing up in a world devastated by runaway climate change unless the world acts today,” says Niels Burger, a 48-year-old artist from Arlington, MA. “I don't know why the Boston Globe and other media don't treat climate change like the existential crisis that it is.”

XR Massachusetts views the Globe as a partner, not an opponent, in informing the public of the full extent of climate change. After several unanswered requests to meet with Globe Editor Brian McGrory to discuss how the Globe could best address the climate crisis, today its members will remind the newspaper of its mission to “expose the truth, even in defiance of powerful interests” as well as its historic role in exposing human rights abuses. The group will present the Globe with a public call to action to fully communicate the severity of climate change. XR Massachusetts invites the Globe to take leadership in several areas, including:

The event is beginning with a ceremony to acknowledge the lives and lands lost to the violent and unjust systems underlying the climate crisis, culminating in the mourners collectively ringing bells to summon the community together for action. Accompanied by the Second Line Social Aid & Pleasure Society Brass Band, the group will march to the Globe headquarters to deliver their call to action. Some members of XR plan to take non-violent actions to disrupt business-as-usual and demonstrate to the public the gravity of the threat facing humanity. They see civil disobedience as a last resort to change the government’s course, since thirty years of legislative campaigning has not prevented a sixty percent increase in carbon emissions.

Actions are taking place this week in cities across the U.S., including New York, Chicago, Los Angeles, Atlanta, Portland, Denver, and Austin. Since Monday, thousands of citizens have occupied the streets of London, successfully blockading some of the city’s busiest roads and bridges.

Decades of failure on climate change policy has shown that the climate crisis requires a mass, collective movement to demand transformational change. “In this time of climate action, our traditional political decision-making procedures have malfunctioned,” says Parke Wilde, professor of food policy at Tufts University. “Our youth already are taking to the streets in protest. In a spirit of intergenerational justice, we want to give our children a fair chance at the opportunities we had. It is time to rise up.”

In a statement of support for Extinction Rebellion, the Greater Boston Physicians for Social Responsibility said, “Climate change is an emergency and poses a moral call to action. Assertive, sustained public pressure is required. That is why we wholeheartedly support the work of courageous groups like Extinction Rebellion and their allies.”

Extinction Rebellion was formed in the United Kingdom at the end of October 2018 with its initial Declaration of Rebellion. A few weeks later, 6,000 rebels peacefully blocked five major bridges across the Thames in London. The movement has spread to include 49 countries and tens of thousands of people across the world, united by the goal of securing a future for life on earth.