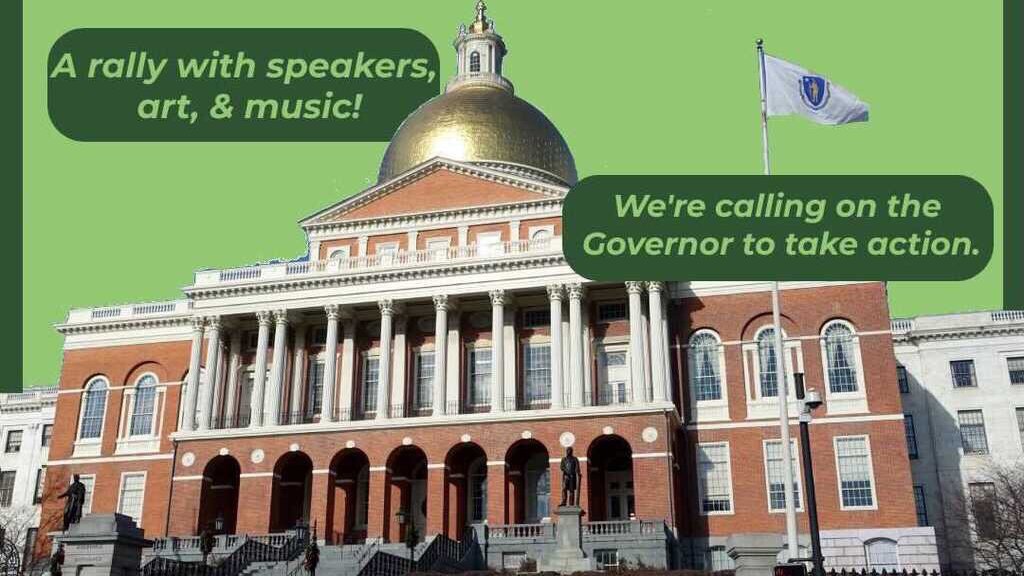 BOSTON, MA — A coalition of climate justice activists gathered outside of the State House on Saturday to demand that Governor Baker take urgent action on racial and environmental injustices being faced by communities around the state. They represent communities where harmful infrastructure has or will soon be developed. These communities are working class, Indigenous communities, and other communities with high populations of people of color.

“Governor Baker has hidden from his poor energy decisions for the duration of his tenure. He has hidden from Weymouth, West Roxbury, Sandisfield, and East Boston. It is time for him to stop hiding and start acting as if our planet depended on it. Because it does," said Alice Arena, community organizer with Fore River Residents Against the Compressor Station (FRRACS).

Activists from local climate and social justice organizations spoke about projects in their communities that they’ve been asking Governor Baker to stop for years.

“We call upon Massachusetts to be a leader in protecting the land, water, air, and all life living there, and to implement true climate solutions,” stated Mahtowin Munro, an activist from United American Indians of New England (UAINE). “A first step should be listening to Native American tribes and Communities of Color in the state. Environmental racism is rampant in Massachusetts. It continues to be a major factor in deciding to green light projects such as the electrical substation slated for East Boston in an area already overburdened. The state needs to seek and heed the advice of Native American tribes about development that will impact their lands and ancestral waters, such as the clear cutting of precious Pine Barrens in the southeastern part of the state.”

The activists aim to raise awareness about harmful fossil fuel projects in communities like Weymouth, East Boston, and Peabody. These communities are all Environmental Justice communities, based on household income, minority residents, and/or language access. The activists also aim to raise awareness about injustices faced by Indigenous people in Massachusetts, including the forced development of Indigenous lands which has devastating effects on the environment.

“There is no environmental justice without Indigenous people,” said Jean-Luc Pierite, Tunica-Biloxi Tribe of Louisiana, president of North American Indian Center of Boston. “We remain committed as Massachusetts' oldest urban Indian center to uplift the demands and experiences of our host tribes, as well as all our relations across Indian Country.”

“Governor Baker continues to approve fossil fuel infrastructure projects in low income and vulnerable communities. It’s time Baker is held accountable for the criminal level of damage he is causing working-class communities. These projects have resulted in massive gas leaks, and the East Boston Substation is next to a children’s playground. It’s just terrible,” said John Walkey, a community organizer of GreenRoots in East Boston.

Activists united to call Governor Baker’s attention to a few of the many environmental injustices that he has the power to end:

● In East Boston, a community that is predominantly low-income people of color, the Baker administration has approved the Eversource electrical substation. The substation will be built in an area at risk of flooding and near a playground. The public hearing process failed to provide adequate translation for the Spanish-speaking community. Kim Janey, acting Mayor of Boston, said, “From what I have seen, the substation plan is based on flawed projections and flawed priorities.”

● In Indigenous communities across the state, land is often taken without consent from the Indigenous people who live there and rely on it. Since 75% of the world’s remaining biodiversity remains in Indigenous territories, the forced development of Indigenous lands is an egregious example of environmental racism.

● In Weymouth, a natural gas compressor station was constructed in late 2020. Since it began operation, its had 6 large failures, leaking tens of thousands of cubic feet of pressurized gas into the air. Despite these failures, the Baker administration is refusing to shut down the compressor station.

● In Peabody, a new natural gas plant is being constructed, despite lacking an environmental impact study and health assessment. Gas pipelines around the state leak, with over 30,000 leaks in 2018. The community will bear 30% of the cost and is concerned the plant’s emissions and leaks will kill people.

The activists demand that the Baker administration:

“Baker claims to be leading on environmental issues, but these projects clearly show that he’s not. He talks a big game, but it’s only empty promises. What has he done in his 7 years in office? Nothing that wasn’t mandated by the legislature. We only have 7 years left to transition away from fossil fuels and reach net zero emissions. His corporate ties are more important than public health and safety,” says Allen McGonagill, organizer from Extinction Rebellion Boston.

“Communities around the state can’t escape Governor Baker’s projects, and he can’t escape us. We’ll keep coming back if we have to,” says Ross Quinn, organizer with The Sunrise Movement, a youth movement that organizes to put an end to climate injustice.

On top of burdening local communities, Baker’s inaction on the climate crisis puts the entire global population at risk. The International Energy Agency has warned that to limit warming in accordance with the Paris Climate Agreement, we can’t build any more coal, oil, or natural gas infrastructure. Even if we stopped building new fossil fuel infrastructure today, many climate scientists are concerned that won’t be enough to avoid triggering Earth’s tipping points. Triggering tipping points would result in uncontrolled, runaway heating and what scientists call an “uninhabitable hothouse Earth.”