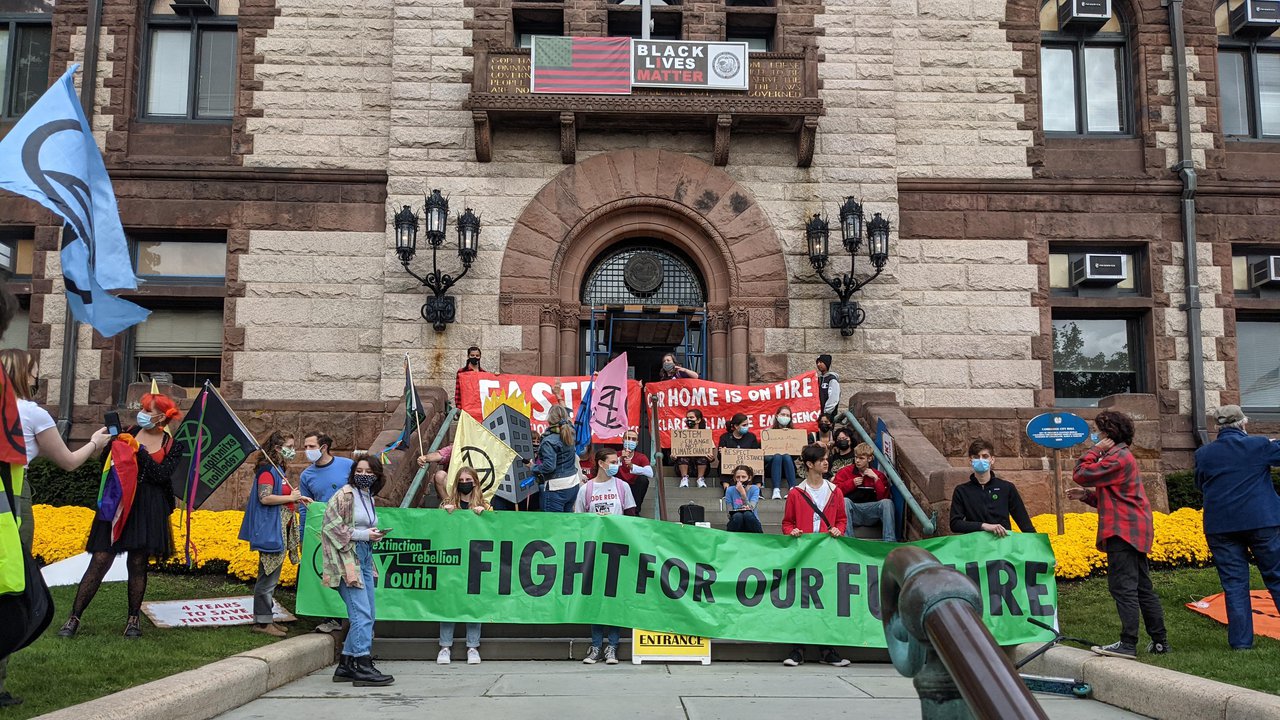 Climate Justice Activists Declare: “HONK! For Our Future, 4 Years to Save the Planet!” ¹

CAMBRIDGE, MA — A youth-led climate march, organized by Extinction Rebellion Youth Boston and the HONK! Festival, met at Cambridge City Hall at 2pm and marched down Mass Ave to the Mass Institute of Technology.

The march, titled; “HONK! For Our Future, Four Years to Save the Planet,”¹ focused on the leaked International Panel on Climate Change (IPCC) report which states that greenhouse emissions must peak in 4 years or the world will face catastrophic climate breakdown.² The march also demanded that the city of Cambridge, the state of Massachusetts, and MIT take immediate steps to reduce fossil fuel emissions.

"I had the privilege of growing up in a family where politics was discussed on the regular, allowing me to get involved with XR without fear of being turned down for being 13. I get frustrated when I see politicians constantly ignoring the fact that the people the climate crisis is going to affect are kids my age, and yet they are still accepting donations from polluters. The average member of Congress is nearly 60, and the average Senator is 63. They won’t live to see the worst effects of the decisions they’re taking - or not taking,” said Elizabeth Tucker, member of Extinction Rebellion Boston.

At Cambridge City Hall, Clara Golinsmith, age 12, a member of Extinction Rebellion Youth, talked about the consequences of the climate crisis for her generation. She addressed the need for the world to force governments to take immediate action to avert climate catastrophe.

"The leaked 2022 IPCC report makes clear that we are running out of time to stop climate catastrophe. I am 12 years old, and if we don't take drastic action to reduce greenhouse gas emissions before I graduate high school, it will be too late. We are HONKing for our future and to demand a just transition off of fossil fuels,” said Clara Golinsmith, member of Extinction Rebellion Youth Boston.

A new study released on September 26, 2021, published in the journal Science,³ ⁴ found that children born in 2021 will, on average, face seven times more heatwaves, twice as many wildfires, and three times as many droughts, river floods and crop failures as people born 60 years ago. A new report by Unicef, their first child-focused climate risk report, found that one billion children are at ‘extremely high risk’ of the impacts of the human-created climate crisis, and that children in the Central African Republic, Chad, and Nigeria are at the most risk.⁵

"This basically means that people younger than 40 today will live an unprecedented life even under the most stringent climate change mitigation scenarios," lead author Wim Thiery said in a statement. "Our results highlight a severe threat to the safety of young generations and call for drastic emission reductions to safeguard their future."

Quinton Zondervan, a Cambridge City Councilor, addressed the need for Cambridge to enact stronger emissions regulations on new large building construction. Alex MacGibbon, age 16, from Mothers Out Front Cambridge spoke about a bill to reduce methane gas use in the state, working in opposition to gas companies who are quietly investing billions into building new gas pipelines in Massachusetts.⁶

Band Land, a brass band made up of Cambridge Rindge and Latin High School students, led the march down Mass Ave behind a green banner that declares FIGHT FOR OUR FUTURE. Green Cambridge carried giant puppets of local wildlife made by Cambridge Wildlife Arts, and the Red Rebel Brigade, a performance group dressed all in red to symbolize mourning the loss from the sixth mass extinction, silently marched with the parade.

People carried painted cardboard cutouts of flooded and burning houses. There were flags and signs reading FOUR YEARS TO SAVE THE PLANET!,¹ HONK! FOR OUR FUTURE! and CLIMATE EMERGENCY!

The march ended at MIT on Massachusetts Ave. where a member of Divest MIT stated their demands that MIT immediately divest from the fossil fuel industry.

“It’s past time for MIT and other powerful institutions to use their wealth and influence in a way that pushes our society towards a truly just transition. At the bare minimum, this demands divestment from current fossil fuel companies and a focus on distributing wealth,” said Jessica Cohen, member of MIT Divest.